The Mother of All Bubbles

It is very obvious that the credit bubble is still expanding even as it already exceeds the South Sea and Mississippi bubbles in size, magnitude, and duration. The credit bubble that is in play throughout the Western World (not just the United States) is literally the mother of all bubbles. The credit bubble did not burst during the "Panic of 2008", in fact, the bubble is over 40% larger than it was in 2007.

The credit bubble formed in 1974, at the start of Cycle wave V (1974 - 2000) up and continued to expand in size and area of influence. As we approached the peak of Grand Supercycle wave [III] (1784 - 2000), a series of smaller bubbles started to form. With a very long topping process in play, we have seen a series of smaller bubbles form and pop in succession even as the mother of all bubbles, the credit bubble, continues to relentlessly expand.

Here is a long term chart of the DJIA from 1997 - 2021 illustrating the topping process and the bubbles: 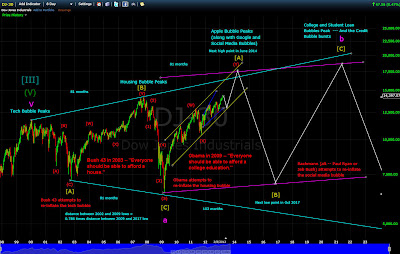 As the chart illustrates, the first of the smaller bubbles to form and go parabolic was the dot com bubble, also known as the tech bubble. The Nasdaq went parabolic in 1997 and shot up to a peak of 5132. More information on the dot com bubble is here. The bubble popped in 2000, ushering in the first stage of the Grand Supercycle degree bear market and associated major depression in the Western World. The DJIA and S&P 500 also peaked in terms of gold and PPI at the peak of the dot com bubble, and the peak has not been exceeded since. The aftermath of the bursting of the dot com bubble unfolded during Primary wave [A] of Cycle wave a and lasted roughly 34 months. The Nasdaq reached a low of 1108 on October 2002.

In 2003, The Bush 43 Administration and the Federal Reserve attempted to re-inflate the dot com bubble. With the credit bubble relentlessly expanding, the housing bubble started to go parabolic with the government taking part in the bubble. George W. Bush, during the 2003 state of the union address, said that "everyone should be able to afford a house". The parabolic phase of the housing bubble unfolded during Primary wave [B] of Cycle wave a in which the DJIA soared to over 14000 and the S&P 500 hit 1576. While the DJIA reached new highs in nominal terms (DJIA/$ ratio), it remained well below the 2000 high in real terms (DJIA/gold ratio and the DJIA/PPI ratio). The housing bubble popped during the 5 year rally. The popping of the housing bubble, and the sub-prime mortgage crisis that followed, would play a strong role in ushering in the "Panic of 2008", which unfolded during Primary wave [C] of Cycle wave a.

In 2009, the Obama Administration and the Federal Reserve started its attempt to re-inflate the housing bubble. The Obama Administration has thrown more than $7 trillion in cheap money into the economy, and the Federal Reserve has done a series of QE programs since March 2009. The money has pretty much stayed at the top of the pyramid, pumping up equity and commodity markets as well as causing the college bubble, the social media bubble, the Apple bubble, and the Google bubble to go parabolic. The current reflationary period, Primary wave [A] of Cycle wave b, is unfolding as a double zigzag with a projected peak in June 2014.

The rally off the March 2009 low is corrective and the rally has been unfolding with declining volume, with volume spikes during the Flash Crash and the large pullback in August 2011. The chart illustrates the bear market rally: 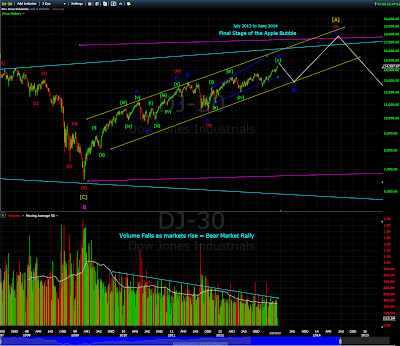 In bull markets, volume rises as the market rises, and falls during pullbacks. Volume is a very important momentum indicator. Even as the DJIA rose to new all-time highs in nominal terms, the DJIA is still far below the 2000 and 2007 peaks in real terms with the DJIA/gold ratio at 45.9 in 2000, ~16 in 2000 and it is at ~8 now. 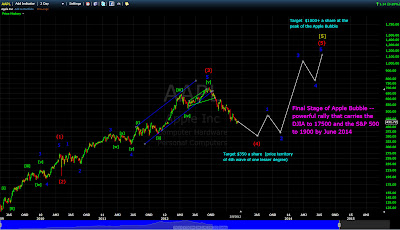 Apple's stock should fall to a low of $350 a share in July 2013. The structure is clearly corrective, unfolding as either a double zigzag or a triple zigzag. The final stage of the Apple Bubble is expected to unfold as an epic melt-up in the company's stock. Apple is a global corporate bellwether in the same way that the South Sea Company was a global corporate bellwether in the 1700s, so the influence of the bubble will be global. The melt-up is expected to have a very powerful influence, with many tech and social media companies taken along for the ride. The implication of the epic melt-up is a very powerful rally in equity markets with the DJIA hitting 17500 and the S&P 500 hitting 1900 at the peak of the Apple Bubble. It is worth noting that social media has morphed into a full blown bubble of its own, and Google has also turned into a bubble as well. 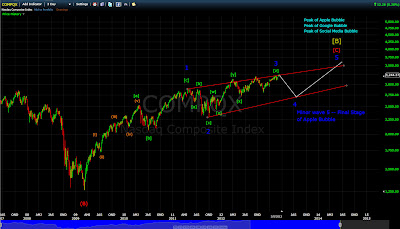 The longer term chart of the Nasdaq shows a Cycle degree zigzag in progress, likely the first part of Supercycle wave (a) (2000 - 2042) in the index, which should unfold as a double zigzag: 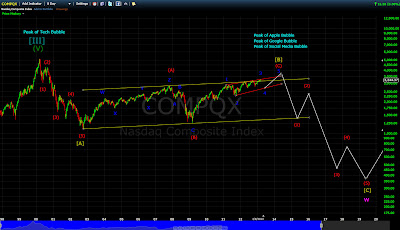 The Nasdaq from 2000 clearly builds the case for the Apple bubble, the Google bubble, and the social media bubble bursting in 2014, while the college/student loan bubble and the credit bubble continues to expand all the way to the end of the "extend and pretend" phase of "The Great Deflation".

The mother of bubbles, the credit bubble, will continue to expand all the way to the end of Cycle wave b (2009 - 2021). Rising interest rates, combined with the continued addiction for debt throughout the Western World, will eventually cause the credit bubble to burst, which would also trigger the bursting of the college / student loan bubble. Just before the bursting occurs, the DJIA will reach 18750 and the S&P 500 will reach 2100. The bursting of the credit bubble will usher in the third phase of "The Great Deflation", Cycle wave c (2021 - 2042) of Supercycle wave (a) (2000 - 2042) in which a deflationary collapse of the economy throughout the Western World unfolds in full force.
Posted by AVBursch at 7:18 PM

Our Past, Current, and Future Roadmap